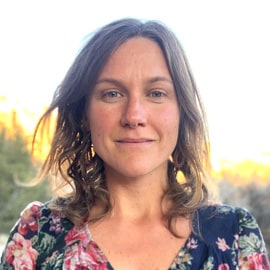 Dedicated since childhood to listening and learning from the subtle whispers of the plant and animal worlds, Alexx has followed her nose and heart on a wild goose chase toward connection and homecoming. After earning a degree in Culinary Arts (2003), Alexx worked as a private chef and cooked on cruising sailboats in Maine. She turned to farming in 2006 upon stepping out of the culinary world to sprout seeds and grow organic food through working in sustainable and biodynamic agriculture. This quest led her to volunteer on organic farms in Europe and across the US, start her own farm, run a landscaping business and tend trees at an arboretum in the Catskill Mountains of upstate New York. She served on the board of the Berkshire Food Co-op in Great Barrington, MA from 2012-2015.

Alexx made her way to Quail Springs after a year of exploring the western US in a van with her dog Yogi. She first worked as the Animal Systems Farm Director before changing to the role of Executive Director.

She is motivated by a continually deepening curiosity for why people, plants and animals do what they do. In continued attempts to understand herself and her fellow humans while nurturing more ease and connectivity she has studied non-violent communication, somatic movement, reiki, meditation and animal communication. Alexx is humbly committed to ongoing learning and expansion of radical inclusivity and the individual/collective healing of societal and generational trauma.

Alexx experiences unbridled passion for singing harmonies, getting better at rock climbing, folk art and craft, oddities, mystery and deep belly laughs. She loves to ramble through driving country roads and exploring abandoned buildings. She finds solace in the practices of writing, meditation and hiking.