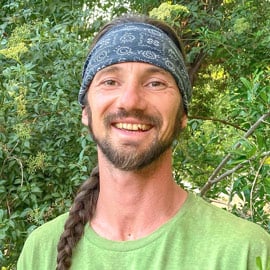 Haris is a dreamer and a student of the soil, medicine, and the dance of life-light. Shortly after birth in the former Yugoslavia, his family had to flee due to a genocidal civil war. His start in life germinated a yearning for and study of justice, leafing into a seeking to understand why humans so often choose violence over cooperation.

His family landed in San Francisco where he grew in every possible direction through the exposure to diversity and myriad cultures that thrive in the Bay Area. He complimented this social, metropolitan education with higher education at City College of San Francisco, where he studied people, dance, and photography for six years.

After returning to Bosnia to try and start a farm, realizing he was just a city boy, he returned to California to study soil at Live Power Community Farm in the Round Valley of Mendocino. It was here that he had his first exposures to draft horses, community living, herbal medicine concoction, seed holding, and the art of compost altar creation.

Haris aims to vitalize humans and nature through his work with the soil, plants, and elementals. He believes our work with the natural world is our highest spiritual pursuit and through this work we can find all that we seek and need.

Haris often daydreams about his life’s grand project of creating a Quail Springs type learning and healing center on his small piece of earth near the pyramids in Bosnia. He imagines how such a place would allow him to share the knowledge accumulated during his wanderings and do justice by the land and people which conjured his body and soul.