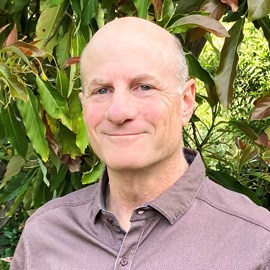 Family and a life-long fascination with the natural environment ultimately led Matt to the classes, people, and eventually the Board of Directors at Quails Springs. Raised in the 1960’s on Maryland farmland, Matt spent his youth exploring forests, swamps, and streams and having long conversations with the eclectic group of visitors to the centuries old farmhouse in which he lived. The origin of his career was a junior high school field trip to Death Valley where he became enamored with the natural processes and water features laid bare. After receiving a degree in geology from UCSB, he went to work as a consultant cleaning up hazardous waste throughout the Los Angeles Basin. Long days spent in apocalyptic settings of abandoned factories and contaminated waste fields imprinted on Matt a profound concern for the earth and the human impact upon it.

The literal and figurative tendrils of Quail Springs reached Matt from several directions when he worked as the County of Santa Barbara Hydrogeologist, the duties of which included monitoring groundwater wells throughout the Cuyama Valley and those of Quail Springs. Concurrently, Matt attended Quail Spring’s watershed reconstruction classes and visited there with a good friend who taught permaculture. Over a period of several years, Matt periodically brought his young daughter to Quail Springs where they camped, frolicked with the goats, and helped prepare meals, the experience of which they both cherish.

After a stint as Santa Barbara county’s Water Agency Manager, Matt now works for a local consulting firm where he specializes in groundwater sustainability and assisting California’s tribal and underrepresented communities with water quality and infrastructure. He is a member of Engineers Without Boarders with which he helped to bring potable water to a Masai village in Tanzania. He is a member of the American Institute of Hydrology and works with the Diversity, Equity, and Inclusivity Committee helping to bring a more diverse group of people into the natural sciences.