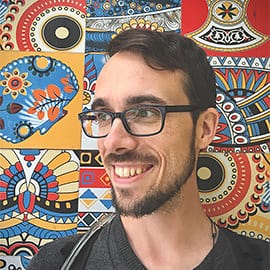 Ryan grew up in southeastern Minnesota and for twenty-some years managed to put up with the humidity, mosquitoes, and six month long winters. In an effort to apply some of his anti-capitalist ideals to his way of living, Ryan quit his desk job of six years, gave up his comfortable and affordable apartment, sold most of his belongings, packed what was left in his Honda Civic and headed out west to learn about natural building, permaculture, and off-grid living. After doing nine months of work-trading on several natural building projects throughout California, he discovered that a place called Quail Springs was holding a natural building internship program and he jumped at the opportunity. As the internship came to a close, the offer to stay on for longer was proposed to him and gratefully accepted. As Ryan’s relationship with Quail Springs and the community grew deeper, so too did his roots.

Like the rest of the Quail Springs community, Ryan has contributed to the organization in ways routine, obscure, and specialized – from washing dishes, to building cat doors, to creating this very website. Given his skill in most things digital, he has also naturally filled the roll of photographer, web & graphic designer, and in-house-on-demand-computer-problem-fixer.

After almost six years of calling Quail Springs "home", Ryan has since moved on to new landscapes. However, he continues to be part of the team by tending & maintaining the Quail Springs website that he created several years ago.