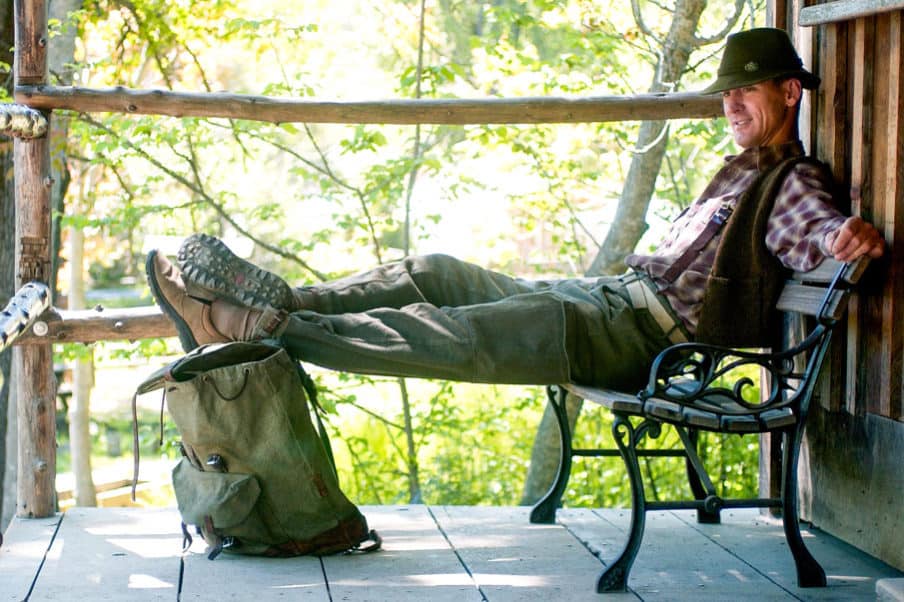 Nature writing has largely ignored the fact that humans are natural, & that their environments are a part of nature. In The Urban Ecology Almanac, excerpted here, biologist & permaculture designer Laine MacTague strives to inspire us to think of where we live as habitat, and to begin to lavish the love & care upon it that we tend to reserve solely for the most beautiful & remote wildernesses. MacTague anchors his story in the natural history of a 1/10th acre urban residential property, where he has been working for several years to vitalize a small part of what he has come to see as our most damaged natural environment.

January Excerpt of The Urban Ecology Almanac
by Laine MacTague

January of 2015 was, to my knowledge, the first time an American robin found this little yard of sufficient interest to warrant a visit:

I know so little about what will change a bird’s mind. Is the robin slumming? Lost? Or perhaps he stopped in the avocado tree because while passing over, heading for lands better known to him, he noticed the thick, damp mulch under the “ditch orchard” – a single row of fruit trees on an 8’ wide strip of land, bordered on the south by a cinder block wall marking the southern edge of this property, and on the north by a v-shaped drainage ditch. The north side of the ditch forms a base for twelve vertical – & roughly twenty-two horizontal – feet of terraced, south-facing ground. 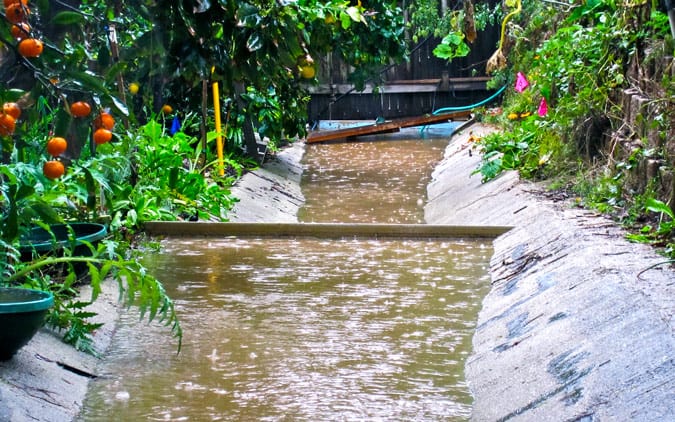 Atop this is the 25’ by 80’ main back yard. On the southwest corner of which, looking down the terraces, across the ditch, into the orchard with the mulch bed redolent of worm castings, I sit – wondering about the decisions of robins.

Bird activity comes in waves. I am sure Odin ordered things this way so there is time to make a fresh cup of tea now & then. O Beneficent Creator, thank you.

I am reminded that I have yet to plant a tea plant, or two, in this yard. In light of the considerable amount of calories I get from tea, this strikes me as a serious design implementation failure on my part.

On my way in to make tea, I prune mildewed leaves from a perennialized ruby red Swiss chard that I never planted. There are many around the yard. They more or less never stop producing tasty, notably salty leaves, but it can be challenging to tell the mildewed from the healthy, when I am picking dinner salad after dark. So I prune as I walk by. It takes far less time to do than it does to write about it – basically none. And it saves me far more time later, separating leaves. I toss the less desirable ones to the well-contented chooks (chickens) as I go in. Planning and design. Allen’s hummingbird, turkey vulture. 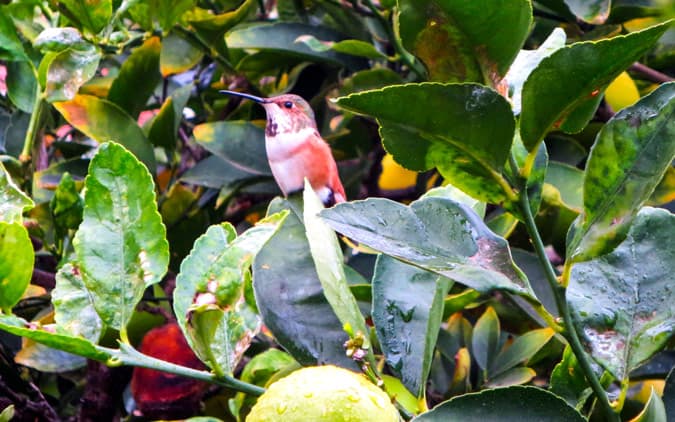 Tea, like chard, is a perennial experience. I am supposed to be talking about January. Here, one of the main things I do in January is make sure the Santa Ana winds don’t dry out & kill the burgeoning cover crops I sowed in the evening before the second rain of the season – which this year, was in December. With luck & the powder stays dry, the newer orchards on the terraces will have living, self-repairing mulch by late spring. Nitrogen-fixing mulch. Pollinator & predator insect-housing mulch.

Some sort of wren I fail to identify. Eurasian collared dove. Cessna Citation.

A large flock of gulf fritillaries.

The gulf fritillary is a smallish, orangeish beast that produces ubiquitous grey & maroon striped caterpillars. They are passionate about the passionfruit vine I propagated from samples pulled from an overgrown fence on a roadside in Somis. I shower behind a trellis covered by it, & eat the creepy blood red pulpy seeds found inside the soft, felty, peach-coloured fruits. The fritillaries eat the nectar from the ornate flowers, and their caterpillars eat – well, the rest. There goes my shower screen. And then they become more fritillaries, which brighten the yard like any flappy mobile showy orange flower might. The screen rejuvenates itself. I shower amidst passionflower, butterflies, & fruit, watering as I go. Planning and design. 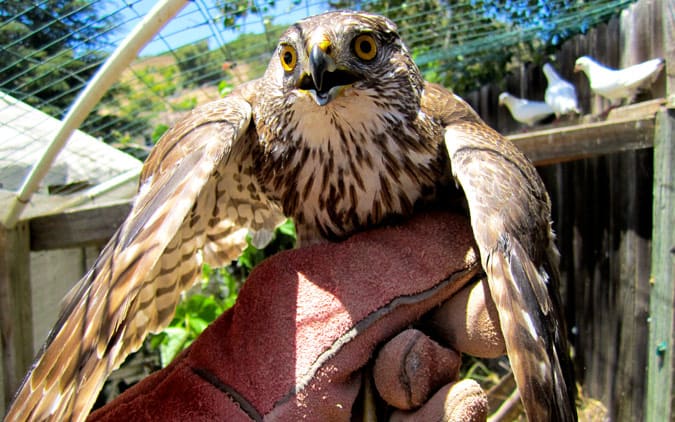 And all the rest depart away.

Dove of Mourning. Finch of Houses. Sparrow of the White Crown.

Perhaps one of the ways in which the Mediterranean climate – at least this one, here in coastal southern California – is unique, is that in winter, things happen quickly. Winter is a bit like spring. Rain falls, & seeds that have lain quiescent in ground either baked & dry or inundated with chemical-laden municipal water suddenly explode into burgeoning greenery – which then grows slowly, in the short & relatively cool days. Fruits ripen – bananas & tangerines were heavy this January – and the tender new plant shoots join them in attracting hungry animal life.

The snowbound might be amazed, too, at wintertime insect activity in this habitat. Which – along with the greenery & the fruit – intensify bird activity.

Month by month, I want to tell a year-long story about applying permaculture on land. The land in question is an urban tract, with an urban tract home on it, surrounded by wide paved roads with other urban tract homes along them. It is in close proximity to all manner of natural microhabitats: The Ralph’s mall is less than 2 miles away as the mourning dove flies – though they seldom go there. The Nancy Bush memorial park is less than a mile off; California towhees lurk in Nancy’s bushes. A scant league southwest lies CMA airport, & all the rich variety which lies within its borders. Think red-tailed hawk, think killdeer. Weep for the absence of the American & pied avocets, and numerous diving & dabbling ducks, lost to that place when the wetlands were drained in the early ‘80s, presumably to protect human pilots from harm caused by impact with those other flyers who know of flight in ways we struggle to comprehend.

There may be small portions of the planet that are not yet human-dominated, but little if any of it remains uninfluenced by humanity. During a permaculture design course I attended at Quail Springs, I heard that the mothers’ milk of the Greenland Inuit carried some of the highest levels of chemical tainting of mothers’ milk measured the world over. Urban & industrial activity on this planet has repercussions at its farthest reaches.

It is vital that we begin to think of where we live as habitat, and lavish the love & care upon it that we tend to reserve solely for the most beautiful & remote wildernesses.

We don’t need to exclude ourselves from either of these valuable habitats to save them – or ourselves. We need only make our presence regenerative. Permaculture, with it’s basis in Earth-supporting ethics, is an ideal design system for accomplishing that.

The urban environment may be the largely unrecognized low-hanging fruit: There are many, many people here, impacting the environment. Which means that there is the potential for many, many people here to impact the environment in a regenerative way. Our municipal systems have been designed with a dearth of thought & observation, many of them limping along in spite of glaring errors that a few simple changes in perspective can shed light upon, and for which permaculture design can likely provide solutions. I seek to rejuvenate, to revivify urban ecosystems. I am starting by applying permaculture design within my own back yard.(I’ve got my eye on the rest of the city.)

Which is why I sit in this backyard, several mornings a month, and watch. One of the basic principles of permaculture is the use of careful observation & thoughtful interaction. One of the things I observe is bird life. Yellow-rumped warbler. House wren.

Late in 2011 I had just started making small changes to this property. As a wildlife biologist, I was trained to observe as a means of data collection. I wanted to see how the changes I make on this small chunk of land – about a 10th of an acre – affect animal diversity. I started cataloguing all the animal & plant life on the property, & recording, in particular, first sightings. In 2015, I still found myself adding almost one bird a month to the list. I added five more in 2016: Tennessee warbler, warbling vireo, hairy woodpecker, black-headed grosbeak, brown-headed cowbird. My 2011 list included twenty birds. The 2017 list numbers seventy-three.

To help put that into perspective, San Francisco Bay National Wildlife Refuge has about 225 species. It covers 30,000 acres; about 300,000 times the size of the land I am working on. Several refuges of similar and smaller sizes are visited by about 200 birds. The 2.6 square mile Wapack NWR boasts 81 species. Sitting on my Aldo Leopold commemorative bench (did you know Aldo Leopold designed a bench?), in my roughly 87’ X 60’ back yard, I’ve spotted 73 bird species. Some are merely passing by, but the majority actually perch on plants that I planted. Eat bugs I want them to eat. Nest in the dragonfruit growing over the outdoor shower. Brighten my day.

It is clear that in 2011, I missed a few – perhaps several – of the bird species then visiting this area. It is equally clear that as this backyard habitat changes as a result of alterations I make in the process of engaging in continuous, permaculture-guided reciprocal interaction with it, more and more avian passers-by become short-term residents, and even nesters. Something is working.

I hope in coming months to share more of the observations and changes I have made in this yard, & to further develop thoughts on municipal ecosystems seen through the permaculture lens.