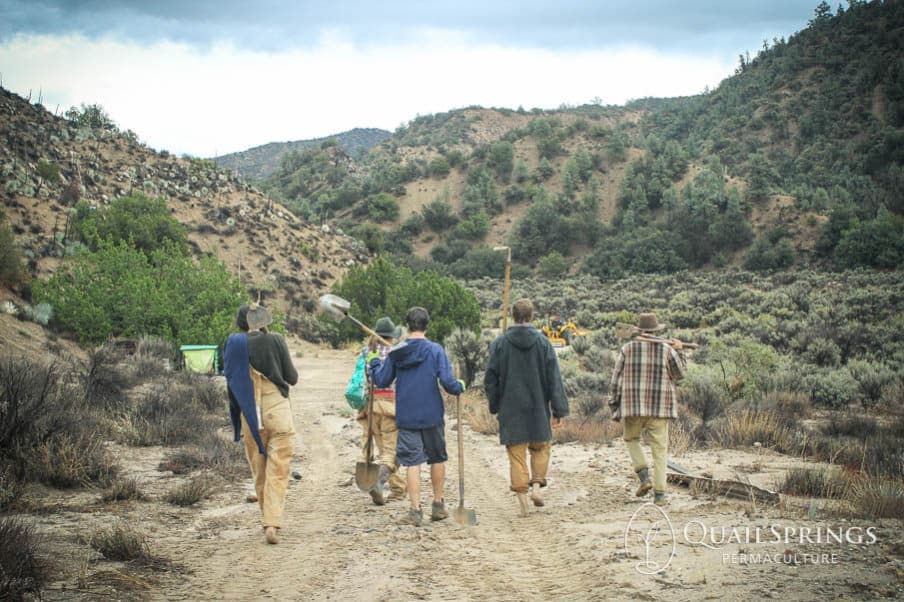 In the context of California’s desperate drought, at Quail Springs the changing weather has resulted in one of the wettest periods in their history. There were over 10 inches of rain during the last rain cycle, between October and September and there have already been over two inches as we go into another wet season.

“The last time we got 10 inches it was when five of them were our big flood,” said Brenton Kelly, our Watershed Steward, referencing the flood in October 2010 that wiped out half of the farm.

This year the extra rainfall resulted in two major flood events that have left their mark on the landscape but the residence and farm with minimal damage. The biggest loss being the work that was done only five days previous to a flood event by the Watershed Restoration workshop.

“It’s a merit to the kind of work we do during the workshop that the default to failure isn’t worse off then when we started,” said Kelly. “Even thought the work was blown out, we still see the beneficial impact of a channel maintaining flood event.”

Many techniques for managing water, such as gabions and swales, in a stream channel situation hold unnatural amounts of water and sediment with the threat of failure being even more damaging then the event would have been without the work. The one-rock damn work of the watershed course didn’t withstand the large event but its effect was felt in the demonstration of sound practices.

“If a different sequence of events had brought some sediment down the work might still be here like last years. The nature of the structures is that they disappear into the landscape.”

Some buildings and homes were affected by the amount of moving water but the crew on site held out in the rain even when their earthworks were overwhelmed.

“It was crazy, there was water everywhere. Six inches coming from behind my house,” said Chloe Rose, a resident Wild Series instructor. “I changed clothes four times because I was so wet.” Rose and the other residents of the small houses in the western village fought against rising waters with shovels and tenacity.

“I felt fortunate to be in the house I was in; the house itself, the gutters and the earthworks were very intelligently designed,” said Willow Brehmer, a resident and Land Steward.

Many residents dug trenches and earthworks to protect buildings as water and material moved heavily. The large swale behind the kitchen was completely filled with sediment. There was much excitement but no lasting damage done to any structures or property on site. Then, soggy and tired, they all enjoyed hot chocolate before heading to bed.

“We’ve seen a lot of odd wild flowers and summer sprouts, but I still see drought stress for the Junipers and Manzanita,” said Kelly. He reminds us that even with the extra moisture Quail Springs is still a brittle place that needs our careful stewardship.